Can People Tell The Difference Between AI & Human Written Content?

There has been a lot of noise in the SEO community around AI and artificially generated content for some time, and the recent emergence of ChatGPT has added further fuel to the fire.

Within the noise is a debate about whether or not AI content is bad and will be punished by Google. There’s even been an emergence of tools, extensions, and methods to help users detect AI-written content – and it is bemoaned as being bad.

Google, through outlets such as Danny Sullivan/Search Liaison, is maintaining a “focus on the output and not the source” approach. In that bad, spammy content that offers no value and is purely designed to rank is bad regardless if it was written by a human or a robot – and also brings us back to EEAT and user value proposition.

To do this, I had one piece of content produced by a writer on Fiverr with 81 five-star reviews, and one generated by ChatGPT. 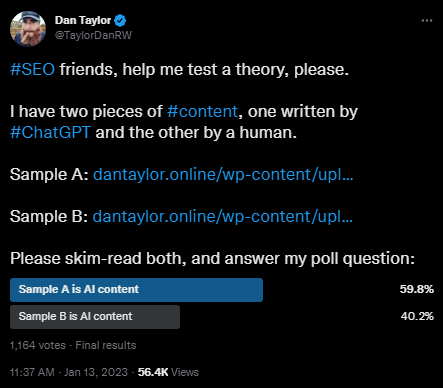 I also published the same poll on LinkedIn, which had 92 respondents with a 75/25 split in favor of sample A being AI-generated content.

This also helped me choose the topic for the content produced by the AI tool and the human writer. In SEO every new trend seemingly spells the death of our industry, and even in my career, SEO has died a number of times.

So the topic chosen is Death – specifically, Death in Tarot.

The reason I chose this topic, is because Tarot isn’t necessarily a mainstream thing that many people know about – but for those who read and practice Tarot it is a deep and complex subject.

In SEO, especially being agency side, we pivot between a multitude of different topics when writing content for clients and not all content is inherently written by those who have researched the topic areas adequately.

For this test, I took the article topic What does the death card mean in tarot? and briefed a human writer with 80+ 5-star reviews for content on Fiverr, and then to ChatGPT.

I didn’t expand too much or provide article structures or subheadings. I wanted to see the depth of the content produced by both actors.

This is something I’ve then checked by a professional tarot reader, and then during the experiment, an SEO professional also invested in Tarot and provided additional feedback.

During the polls, a number of respondents commented their thoughts, opinions, and how they derived the answer that they came too.

Below are a selection of their comments:

How good is the content from a Tarot Reader’s perspective?

As this is a topic area I am not an expert in, as well as understanding if users could determine AI-generated content versus human-written content, I wanted to know if the content by both actors was accurate.

This was their feedback:

(A) was very very in-depth and offered a variety of ways to perceive the death energy in the Tarot. The second one, (B) was more on the mediocre side but still appropriate. I could never get the sense that either one of them was written by A.I. it only sounded like one writer was better than the other lol so, taking a guess here, I’d say (B) was written by the A.I.

And another Tarot reader, also in the SEO space provided further insight into the accuracy. Their feedback was that:

Sample A has incorrect info. Major Arcana 13 is The Death in tarot. (The Temperance is 14th) Sample B has interpreted card genetically. That’s only one side of Death Card. The Death card can be positive as well. It represents transformation and so much more. Sample B makes it sound negative, although trying to paint a positive picture.

The short answer is no. 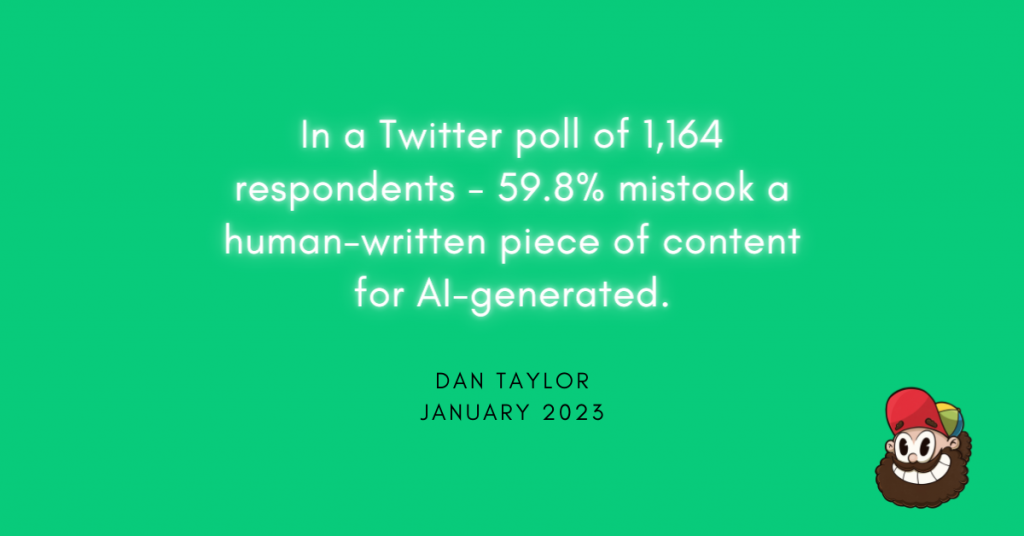 Bonus: Can ChatGPT Tell The Difference?

As an additional test, my colleague Reza gave both content samples to ChatGPT and asked C-GPT if it could determine which

It is likely that the first article (Sample A) was written by a human, as it appears to be more detailed in its analysis and interpretation of the Death card in tarot, and contains more personal and introspective language. The second article, on the other hand, appears to be written by AI, as it is more concise and presents a general overview of the meaning of the Death card in tarot. It also uses language that is more neutral and less personal, which is a common feature in AI generated texts. Additionally, the first article shows more of the author’s personal interpretation and understanding of the Death card, which is less common in AI-generated texts.

My colleague Andy, then directly asked ChatGPT if it wrote one of the samples by providing it a snippet. The response was affirmative, with ChatGPT seemingly recognizing its own work: